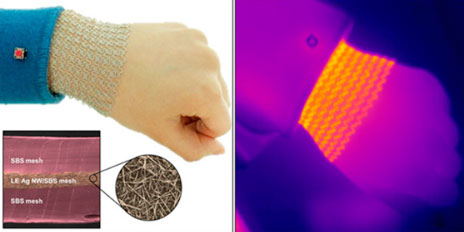 Korean scientists at the Center for Nanoparticle Research, Institute for Basic Science (IBS) in Seoul and an international team have developed a new way to create therapeutic heat in a design made to be light and flexible.

Bucking convention, the team at IBS veered away from components such as carbon nanotubes and gold, and instead investigated the use of thin slivers of silver nanowires, according to a news release from the Institute for Basic Science.

The release notes that the silver nanowires average about 150 nm in diameter and about 30 ?m in length (a human hair ranges from 17 to 181 µm). The nanowires were reportedly mixed into a liquid elastic material made to be both soft and stretchy when dry.

To ensure tightness on the target area while heating, the release says the team devised a 2D interlocking coil pattern for the mesh structure. In order to create the mesh, the scientists poured the liquid mixture into a shaped mold. The silver-elastic mesh was then sandwiched between a top and bottom layer of soft, thin insulation.

The release reports that in material flexibility tests, when placed on knee and wrist joints, the mesh heated while deformed and under stress on the knee and wrist joints. It is made to be lightweight, breathable, and to generate heat over the entire surface of material. It is also designed to maintain a constant temperature, rather than cooling down during use and is battery powered, eliminating the need for an outlet.