With more children participating in sports, physicians are seeing an increased incidence of knee injuries. These youth athletes may be facing early arthritis or the need for knee replacements, physicians suggest.

“Yes, the numbers are up,” says Dr John Xerogeanes, professor of orthopedic surgery and chief of sports medicine at Emory University, in a news story published in the Atlanta Journal-Constitution.

“There are more kids playing sports, so more chances to get hurt. Maybe they are playing too much organized sporting events and injury is secondary to fatigue, etc. It is probably a combination,” he adds.

In light of the arthritis concerns, Xerogeanes assures that ACL reconstruction surgeries and rehab have greatly improved in recent years.

“All of the people who now have arthritis after ACL injuries had surgery when the technique of performing the ACL reconstruction was not anatomic and the rehab was not aggressive,” he says.

Dr James Roberson, professor and chairman of the department of orthopaedics at Emory University, shares in the news story that he hasn’t seen an increase in younger patients seeking treatment for arthritic knees.

“Most commonly [my patients] are middle age or older men with knee injuries from high school, college or professional knee injuries,” he says.

Occasionally, he adds, a patient with “a very severe injury” may develop arthritis in their 20s, 30s, or early 40s.

“In general if this happens it is still much more common in later middle age,” he says, pointing out that a “younger patient may develop problems that prevent returning to their previous level of athletic activity.”

Roberson, in the news story, cautions against performing knee replacements in younger patients, even if arthritis is developing.

“The younger patient with arthritic pain should maximize the nonsurgical options,” he adds. These options include minimizing activities that consistently cause pain, maintaining muscle tone and conditioning by doing activities that provide a high level of exertion without increasing pain, keeping body weight within an ideal range, and taking and anti-inflammatory arthritis medications. 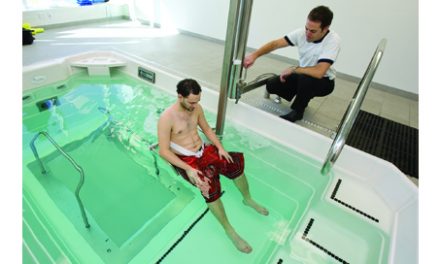 Recovery Ahead of the Curve